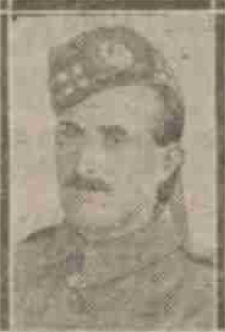 David has no known grave but is remembered on the Thiepval Memorial. He was the brother of Sapper James Tyrie Forsyth 88863, Royal Engineers, who was killed in action 22.03.1918.

David enlisted at the age of 27 at Dundee on 8 December 1915 and was immediately placed on the reserve, being mobilised on 29 Feb 1916.  Prior to his enlistment he was a Grocery Manager employed in Dundee and having volunteered for the Royal Scots he attended the Depot R Scots near Edinburgh at the beginning of March 1916 being posted to training in the 3rd Res Bn R Scots on 5 March 1916   He was posted to the BEF as part of the 17th Reinforcement to 11 Bn R Scots arriving on 7 June 1917 and being sent to 11th Bn in the field on 25 June 1916.   Like so many others on this page,  David’s war was tragically short being posted wounded and missing later presumed Killed in Action on 14 July 1916.

David was one of 7 siblings and three of his brothers also served in the great war.  A younger brother James being killed in action serving as a sapper in the Royal Engineers on 22 March 1918  in the German Spring Offensive,  an older brother John who served as a Sergeant Major in the Seaforth Highlanders and was invalided out due to wounds in 1916 and another older brother William who served in the Army Service Corps and survived the war and according to David’s Casualty Form was later serving in the RAF at Eastleigh in Hampshire.  He also had 2 sisters a Mrs Kendall residing in New Hampshire USA and Mrs Mitchell in Forest Park Road Dundee

Can you tell us more about David Laing Forsyth'? Some additional facts, a small story handed down through the family or perhaps a picture or an heirloom you can share online. Contact our curator...