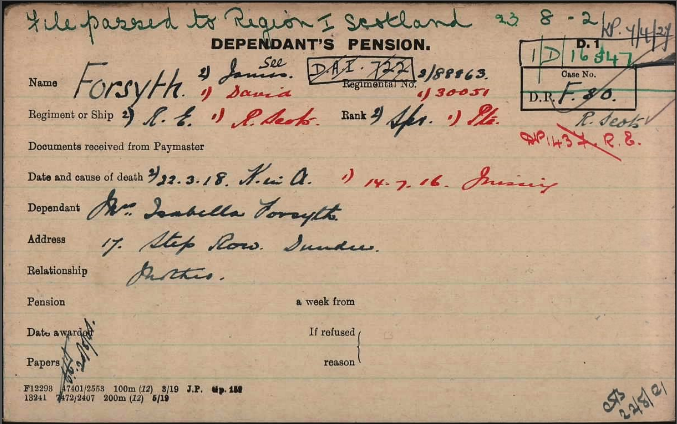 Killed on His Birthday.

Sapper James Tyrie Forsyth, killed in action, belonged to the Transport Section of the Royal Engineers, and was a son of Mrs Forsyth, 17 Step Row.  He had been on active service for two years, and had returned to the front only five weeks after furlough when he met his death on his twentieth birthday.  Sapper Forsyth was formerly employed in Dundee Gasworks.  His eldest brother, Sergeant Major John Forsyth, Seaforth Highlanders, was severely wounded at the battle of Loos, and has since been discharged.  Another brother, Pte. David Laing Forsyth, Royal Scots, was posted missing since July, 1916, and is now presumed to have been killed in action, while a third brother, Corporal Wm. L. Forsyth, is serving in the Mechanical Transport of the A.S.C.  He was in the United States when war broke out, and came home to join up.

Can you tell us more about James Tyrie Forsyth'? Some additional facts, a small story handed down through the family or perhaps a picture or an heirloom you can share online. Contact our curator...