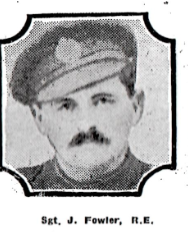 James was the brother of Pte George Duncan Fowler S/22372, 8th Battalion Seaforth Highlanders, who was killed in action 10.12.1917.

Sergeant James Fowler, Royal Engineers, who was killed by the bursting of an enemy shell on 20th October, was the eldest son of Mr and Mrs Fowler, 32 Campbell Street, Lochee.  Sergeant Fowler enlisted in April, 1915, and had been about three years in France.  Before joining up he was a pipe layer in the employment of the Dundee Water Commissioners for fifteen years.  Deceased was well known in athletic circles, and identified himself with Elmwood Cricket Club and Camperdown Bowling Club.  He was a widower, and leaves a boy and a girl to mourn his death.  A younger brother, George, of Seaforth Highlanders, was killed in action on 10th December last.

Can you tell us more about James Fowler'? Some additional facts, a small story handed down through the family or perhaps a picture or an heirloom you can share online. Contact our curator...