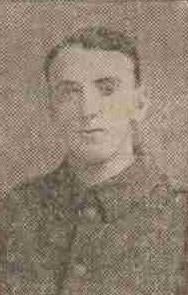 James has no known grave but is remembered on the Thiepval Memorial. He was the brother of Pte Norman James Fowler, 20113, 15th Battalion, Royal Scots, who was killed in action 29.01.1916.

Mrs Fowler, 37 Lyon Street, Dundee, has been notified that her youngest son, sapper James Philip Fowler, Royal Engineers, has been killed at the front.

In a sympathetic letter one of the officers of the regiment states that the work upon which Sapper Fowler was engaged was being carried out under intense shell-fire. A shell landed close to where he was standing, and a fragment struck him on the head killing him almost instantaneously.

Sapper Fowler, who was 27 years of age, was a native of Carnoustie, where his parents formerly resided.  Prior to enlisting in May, 1915, he was in service of the Post Office.  A brother of Sapper Fowler, Private Norman James Fowler, Royal Scots, was killed in January.

Can you tell us more about James Philip Fowler'? Some additional facts, a small story handed down through the family or perhaps a picture or an heirloom you can share online. Contact our curator...