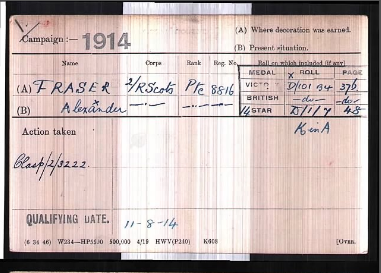 Alex has no known grave but is remembered on the La Ferte Memorial.

Intimation has been received from the War Office that Private Alexander Fraser, of the Royal Scots, who resided at 1 Marshall Street, Lochee, has been reported missing.  The notice came by telegram to his sister and stated that he disappeared after the engagement on 26th August.  There has been a lapse of a month before the intimation has been made by the authorities.

Private Fraser was a reservist, and was among the first to join the colours at the outbreak of war.  He has a brother at the front, Private Daniel Fraser, who is reported as well.

Can you tell us more about Alexander Smith Fraser'? Some additional facts, a small story handed down through the family or perhaps a picture or an heirloom you can share online. Contact our curator...