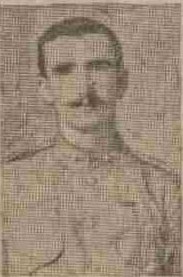 John has no known grave but is remembered on the Le Touret Memorial. He was the brother of Gunner William Fraser, 120908, 320th Siege Battery, Royal Garrison Artillery, who died of sickness, 17.11.1918.

The sad intimation was received from the War Office yesterday by his mother, who resides at 4 M’Vicar’s Lane, Perth Road, in answer to inquiry she made, Mrs Fraser had not heard from her son for a considerable time, and becoming anxious she wrote to the War Office, and received the reply that he was killed in action at Ypres on 22nd October.  Private Fraser was unmarried and served through the South African War.  He was 33 years of age.

Can you tell us more about John Fraser'? Some additional facts, a small story handed down through the family or perhaps a picture or an heirloom you can share online. Contact our curator...