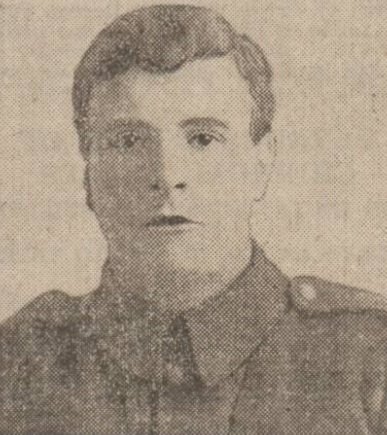 On 26 July 1916, 88674 Spr. David Fyffe, 205th (Dundee) Field Company, Royal Engineers, died of wounds in France, aged 21. A talented local footballer, Fyffe played at outside left for Arbroath before the war. He was the son of David and Catherine Myles Fyffe, 25 Baldovan Terrace, Dundee.
He is buried in Corbie Communal Cemetery Extension, Somme, France, 1. G. 10.DUNDEE FOOTBALLER FATALLY WOUNDED WHILE REMAINING AT HIS POST. A wide circle of friends will regret the intimation of the death from wounds of Sapper David Fyffe, Royal Engineers, son of the late Mr and Mrs David Fyffe, 25 Baldovan Terrace, Dundee. Deceased, who was 21 years of age, died on 26th July from injuries received in action the previous day.
According to information received by his sister from the officer of his section, Sapper Fyffe was fatally wounded while gallantly performing work in the face of great danger. The officer states that deceased was engaged at a task at a spot which was being swept by a sniper. He courageously remained at his post of duty until ultimately he was hit in the stomach.
Sapper Fyffe was well known as a footballer. He was for a time a prominent member of the Dundee junior club Osborne, and latterly became associated with Arbroath. He was much thought of at Gayfield, and played some fine games for the Maroons at outside left. Prior to enlisting he was an apprentice turner with the Wallace Foundry. He had been at the front since January.
Deceased’s connection with football caused him to be well known throughout the whole district, and his death will be keenly felt by many of his old comrades in Dundee and Arbroath. The Courier, Friday, 11 August 1916, 4.

Can you tell us more about David Fyffe'? Some additional facts, a small story handed down through the family or perhaps a picture or an heirloom you can share online. Contact our curator...