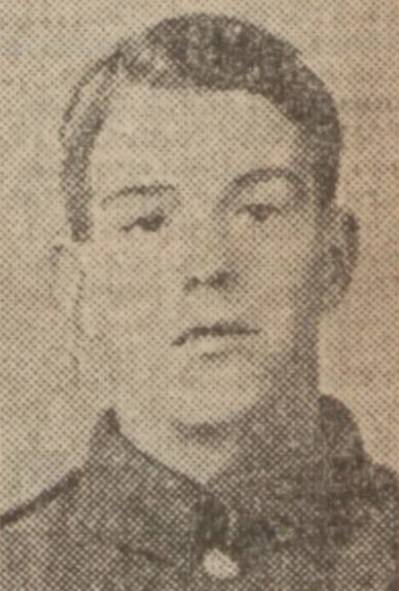 25352 Pte. Owen Gaffney,D Company, 6th King’s Own Scottish Borderers, died of wounds on 19 August 1918, aged 20.
Owen was the second son of Charles and Catherine Gaffney, 26 Hospital Wynd, Dundee. His elder brother John (10255, Pte., 2nd Highland Light Infantry) had been killed in action at Ypres on 1 November 1914.
Owen had been at the front for eighteen months and had been gassed twice. He is buried in Longuenesse (St Omer) Souvenir Cemetery, Pas de Calais, France, V. D. 59.

DUNDEE FAMILY’S HEAVY LOSS. TWO SONS FALL IN ACTION. Mr Charles Gaffney, 26 Hospital Wynd, has received information that his son, Private Owen Gaffney, K.O.S.B., died on 19th August from wounds received the previous day. By the death of Owen, Mr Gaffney has lost both his sons in the war, his elder son, Private John Gaffney, H.L.I., having been killed in November, 1914, at the first battle of Ypres. Owen, who was 20 years of age, enlisted two and a half years ago, and had been on active service for eighteen months. He was gassed in May, 1917, and May, 1918, and had only been a week back to his regiment after convalescence when he received the wounds from which he has died. Prior to enlistment he was employed in Densfield Works. The Courier, Saturday, 31 August 1918, 3

Can you tell us more about Owen Gaffney'? Some additional facts, a small story handed down through the family or perhaps a picture or an heirloom you can share online. Contact our curator...