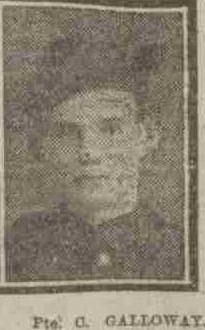 DIE ON THE SAME DAY.

Mrs Smith, 27 Wolseley Street, has been informed that her brother, Gunner George Galloway, 14th Battery, Motor Machine Gun Corps, died in an hospital in Jubbulpore, India, on 29th October, from the effects of pneumonia contracted after undergoing an operation for appendicitis.  A sad coincidence regarding Gunner Galloway’s death is the fact that his brother Charles, who was a private in the Black Watch, died in Dundee Royal Infirmary from pneumonia on the same day.

Charles who was a regular, and at the outbreak of war was stationed in India, subsequently he was drafted to France, and took part in the retreat from Mons, while in the second battle of the Somme he was gassed.  On the 17th October he was discharged, and the next day he became ill, and was taken to the Infirmary.  Mrs Smith’s other brother, Albert, is also serving in France.

Can you tell us more about Charles Brown Galloway'? Some additional facts, a small story handed down through the family or perhaps a picture or an heirloom you can share online. Contact our curator...