We need you to tell us more about the life and times of James B. Galloway 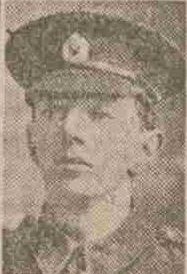 More about James B. Galloway

Mrs D. Galloway, 208 Strathmartine Road, yesterday received official intimation that her youngest son, Pte. James B. Galloway, Royal Scots Fusiliers, died on August 30 in a casualty clearing station in France from the effects of gas poisoning.  Pte. Galloway arrived in France in April of this year from Egypt, where he had served for 15 months.  Twenty-seven years of age, he enlisted in the Royal Engineers in 1915, and was afterwards transferred to the Royal Scots Fusiliers.  Private Galloway was formerly a cooper in the employment of J. & J. Cunningham, Limited.  He was well known in junior football circles in the city, and when in the Royal Engineers won a championship match, Private Galloway kept goal for the winners.  A sad feature of Private Galloway’s death is that shortly before he was poisoned by the gas, he was notified of home leave, and would have been in Dundee this week.

Can you tell us more about James B. Galloway'? Some additional facts, a small story handed down through the family or perhaps a picture or an heirloom you can share online. Contact our curator...