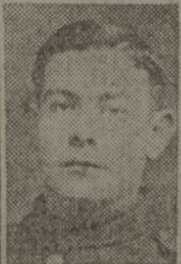 Private James Gauld died of wounds on 22nd October 1918 and is interred in Etaples Military Cemetery, Pas de Calais. The area around Etaples was remote from the main battle and trench areas so was used extensively as a ‘medical’ area with a number of Field and Static hospitals located in and around the area. Many of those buried in this cemetery succumbed in those hospitals.

“He was a boy who knew no fear while in action, and the Military Medal was never better won,”  is the testimony paid by his sergeant to Private James Gauld M.M., R.A.M.C., who has died of wounds received in action.  Mrs Gauld resides at 69 Caldrum Street, and Private Gauld was the son of Mr and Mrs James Gauld, 25 Bonnybank Road.  He joined up in February, 1915, and had been in France for over three months.  An officer, writing to his wife, states that her husband was wounded on 12th October while carrying wounded from the battlefield, and as a recognition of his gallantry on that day the Army Corps Commander conferred on him the Military Medal. Deceased was 26 years of age, and was employed with Mr Robert Ower, contractor, Charles Street, Dundee.  He was well-known in athletic circles, being a member of the Dundee Boxing and Athletic Association, while he held the boxing championship in the city for 1912.

Can you tell us more about James Gauld'? Some additional facts, a small story handed down through the family or perhaps a picture or an heirloom you can share online. Contact our curator...