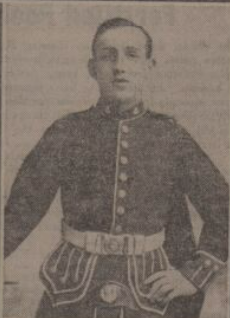 Shrapnel in Right Side.

In a letter to his father and mother, who reside at 23 Kerr’s Lane, Lochee, Private Peter Gellatly. Of the 1st Cameron Highlanders, states that he has been wounded, and is lying in hospital at Birmingham, but is keeping well, and expects to be out shortly.

“I had this morning the first egg I have had for a long time,” he says, “and it was a luxury.  It is a shell wound in the right side I have got, and I am to be put under the X-rays.  I also expect I will have to go through an operation, as I don’t think the bit of shrapnel has been removed yet.  It is not keeping me from eating, however, so you will know it is not very bad.  Don’t worry.

“It is simply lovely lying in a nice soft bed instead of the trenches, but as long as the boys are fighting out there my mind is not at ease, for I can’t help thinking about them.  They have some rough times.”

Official intimation has been received by Mrs Gellatly, 167 Alexander Street, Dundee, that her husband. Private P. Gellatly, Cameron Highlanders, has been missing since 23rd June.  Private Gellatly, who was in the regular army went to France with the Expeditionary Force at the beginning of the war, and has been twice wounded.

Mrs Gray, mother-in-law of Private Gellatly, who also resides at 167 Alexander Street, has given four of her sons to the army, one of whom has been killed in action, and three are still serving with the forces.  Two other sons of Mrs Gray are at present working on munitions.

Can you tell us more about Peter Gellatly'? Some additional facts, a small story handed down through the family or perhaps a picture or an heirloom you can share online. Contact our curator...