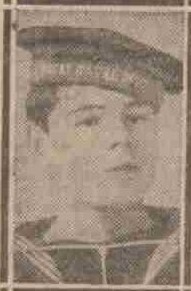 Petty-Officer Joe Walker, writing to a friend in Broughty from the Royal Naval Division Camp, Blandford, tells of an interesting incident that occurred at the camp recently.  He says :___”A draft of the R.N.D. was to be dispatched to the Dardanelles.  Bugler Monaghan, Broughty Ferry, who is not yet 17, asked to be included, but was refused permission to go.  Five times he interviewed his company officer, and every time he was refused.  The draft went off; Monaghan was not included, but just at that time he disappeared.  In due course he was posted as a deserter, but this is what happened.  He took possession of a rifle, equipment, and a sun-helmet belonging to another person, fell in and moved off with the draft.  It was not until they were aboard the ship that he was discovered.  Strictly speaking, he was a deserter and ought to get no more pay.  I am pleased to say that the Colonel has sent off his papers, and he is now included in the draft.  What do you think of that for pluck?  It ought to bring the blush of shame to the cheek of any shirker.

14.7.15.  RND-HQ state this rating was found on board the Transport “Tunisian” as a Stowaway after the ship left England.

Bugler George Monaghan, R.N.D. whose mother resides at 36 Hilltown, Dundee, has been awarded the Military Medal for gallantry on the field.

Bugler Monaghan comes of a patriotic family, his father and two brothers having also answered their country’s call, and one of the latter, Drummer John Monaghan, Black Watch, was killed in action.  George, who is only nineteen years of age, joined up a few months after the outbreak of war, and has done service at Gallipoli and in France.  Indeed, he has not received a furlough for the past two years.  Prior to enlisting he was a seaman.

Can you tell us more about George Monaghan'? Some additional facts, a small story handed down through the family or perhaps a picture or an heirloom you can share online. Contact our curator...