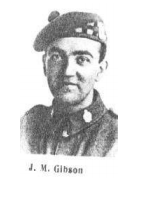 Private Jack Gibson, Black Watch, has died in Salonika.  He was a brother of the Misses Mary O. Gibson, 15 Baxter Park Terrace.  He enlisted in September, 1914, in the Scottish Horse, and was severely wounded in 1915.  He was later transferred to the Black Watch.

Can you tell us more about Jack Martin Gibson'? Some additional facts, a small story handed down through the family or perhaps a picture or an heirloom you can share online. Contact our curator...