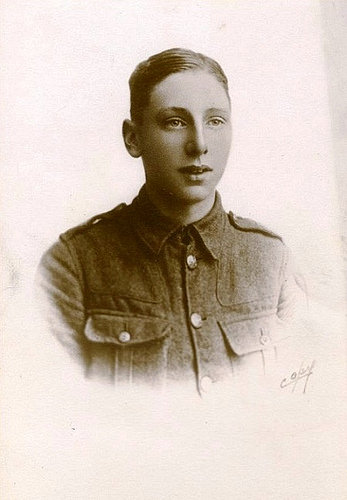 Official notice has been received that Signaller John Morgan Gibson, K.O.S.B., has been posted as missing on 20th Sept.  Signaller Gibson was a Territorial having joined the Fife and Forfar Yeomanry as a trooper in 1915.  He mobilised with that regiment at the outbreak of war, and was promoted sergeant.  He qualified as a musketry instructor at Aldershot, and sometime later was transferred to the K.O.S.B., with which regiment he proceeded to the front, where he has seen much stiff fighting.  Prior to the war he was associated with his father, Mr R. J. Gibson, in business at 6 Panmure Street, Dundee.

Can you tell us more about John Morgan Gibson'? Some additional facts, a small story handed down through the family or perhaps a picture or an heirloom you can share online. Contact our curator...