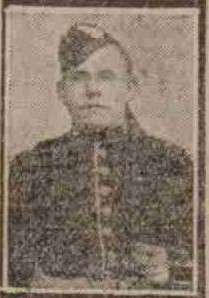 DOING HIS DUTY IN THE TRENCHES.

The name of Private James Gibson, of the 2nd Black Watch, falls to be added to the long roll of Dundee soldiers who have lost their lives in the great European war.  Official intimation of Private Gibson’s death has not yet been made by the War Office, but the Rev. Andrew MacFarlane, chaplain to the Black Watch, has written a letter to his parents, Mr and Mrs Henry Gibson, who reside at No. 1 Cochrane Street which contains the news.

In his letter the chaplain says :__”I am very sorry to have to return to you a letter written to your son which never reached him.  From this letter I have been able to get your address, which up till now I could not discover.  I have some sad news to give you about your son, which, however, you must already have heard.  Private James Gibson was dangerously wounded in the head on November 3 while bravely doing his duty in action at the trenches.  He was carried back on a stretcher to the first-aid post, and I saw him there, and spoke to him.  I could see his condition was very critical.  Later on in the evening he was removed to one of the larger field hospitals some distance away, and I never saw him again.  A day or two later I was informed that he had died, but I do not know where, though I shall probably hear later on.  Under present conditions if wounded here and taken away back it is very difficult to hear what happens to them, but I greatly fear your poor son has not survived.

“I sympathise very much with you all in your great sorrow, and earnestly trust strength and courage will be granted to you to bear it.”

Private Gibson went to the front with the Black Watch from India.  He was about twenty years of age, when he enlisted, and he had been with his regiment in India for nearly five years.  Prior to enlistment Private Gibson was employed in Wallace Foundry.  Shortly before his death he sent a postcard to his married sister, Mrs Reekie, 26 Russell Street, stating that he was well, and that he would write her soon, but unfortunately, he did not live to fulfil his promise.  As an example of the efficient way in which the Black Watch chaplain at the front performs his duties it may be mentioned that he also wrote a sympathetic letter to another sister of Private Gibson in Arbroath, who had sent a parcel to her brother.

Can you tell us more about James Gibson'? Some additional facts, a small story handed down through the family or perhaps a picture or an heirloom you can share online. Contact our curator...