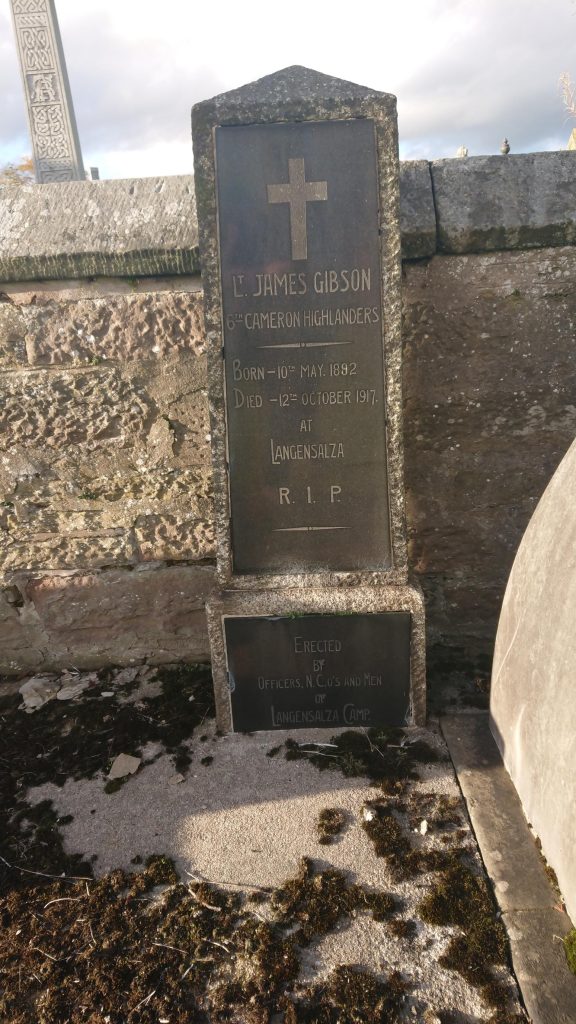 James died of wounds as a prisoner of war, he was the brother of 2nd Lieutenant Charles Methven Gibson, 4th Battalion Black Watch who was killed in action 14.10.1916.

Second-Lieut, James Guthrie Gibson, the elder son of Mrs Gibson, Linfield, West Ferry, has recovered from the wound sustained in France, and left the city yesterday to resume his military duties.

Lieutenant James Guthrie Gibson, Cameron Highlanders, elder son of Mrs Gibson, Linfield, Broughty Ferry  is now reported to have died a prisoner of war.  He was first wounded in October, 1916, but recovered, and was sent out again to France early this year.

After the great battle of 31st July he was reported missing.  On 8th September his mother was rejoiced to learn that he was alive and a prisoner of war in the camp at Langensalza.  Later she received a letter from him saying that he was wounded in the shoulder and arm.  Now she has received a letter from a fellow-prisoner, a captain in the R.F.C., containing the sad news that her son had died on 12th September, 24 hours after an operation.

A younger brother, Lieutenant Charles Gibson, Black Watch, was killed in action in October, 1916.  Much sympathy will be felt for Mrs Gibson in the loss of her only two sons.

Can you tell us more about James Guthrie Gibson'? Some additional facts, a small story handed down through the family or perhaps a picture or an heirloom you can share online. Contact our curator...