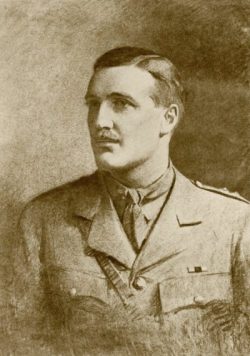 George was the brother of Lieutenant Kenneth Reid Gilroy, 2nd Battalion Black Watch who died of wounds 12.03.1915. Captain George Gilroy, M.C. was born on Sept. 16th.1889. he was the son of G.A.Gilroy of Clatto, Cupar, and one of three Gilroy brothers at Winchester. He came from Ardvreck, was member of Lords and played cricket for Forfarshire. He went on to Oxford, then went into the family business at Dundee. He obtained a Commission in the 8th.Battalion Black Watch, and won the M.C. at Loos.He fell mortally wounded at beginning of the Somme, and died the following day.

Temporary Captain George Bruce Gilroy, Royal Highlanders, who has been awarded the Military Cross, is the eldest son of Mr George A. Gilroy, Clatto, Cupar Fife, of the firm of Gilroy, Sons, & Co., Ltd., jute spinners and manufacturers, Dundee.  Captain Gilroy joined the Black Watch shortly after the outbreak of war.  He was a prominent member of the Forfarshire Cricket Club.  A younger brother, Lieut. Kenneth Gilroy, was killed in action.

The news, which came to hand this afternoon, will cause widespread regret.  Captain Gilroy was a most popular young man in Dundee and wherever he was known.  He was one of the chief supports of Forfarshire Cricket Club, and obtained great distinction as a batsman and wicket-keeper.

Shortly after the war broke out, he offered his services, and gained a commission.  Some months ago he was awarded the Military Cross, and was promoted captain.  He was the eldest son of Mr George A. Gilroy, of Clatto, Fife, and is the second member of the Gilroy family who has fallen.  A son-in-law, Captain Forester, has also been killed.

Official intimation has been received of the death in action of Captain George Bruce Gilroy, Black Watch, the eldest son of Mr George A. Gilroy, Clatto, Cupar Fife, of the firm of Gilroy, Sons, & Co., Ltd., jute spinners and manufacturers, Dundee.  Captain Gilroy was educated at Winchester, going thence to Magdalene College, Oxford.  When the war broke out he was engaged at the firm’s works at Dundee, and immediately offered his services.  He went to France with the 8th Black Watch (Service Battalion).  Captain Gilroy took part in the battle of Loos, where he specially distinguished himself, and was awarded the Military Cross.  He was a keen cricketer, and gained distinction as a batsman and wicket-keeper.  He was one of the chief supports of Forfarshire Cricket Club.

Sincere sympathy will be extended to his relatives in their sad bereavement.  This is the third poignant loss which they have suffered in the war.  In March of last year a younger brother of Captain Gilroy Lieutenant Kenneth R. Gilroy, was killed, and three months later a brother-in-law, Captain Forrester fell.  Like Captain Gilroy, both were officers in the Black Watch.

Can you tell us more about George Bruce Gilroy'? Some additional facts, a small story handed down through the family or perhaps a picture or an heirloom you can share online. Contact our curator...