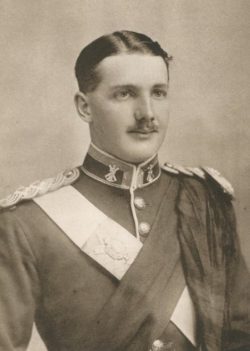 Kenneth was the brother of Captain George Bruce Gilroy, 8th Battalion Black Watch who died of wounds 15.07.1916. Lt. Kenneth Gilroy was born on March 18th.1892. he was the son of G.A.Gilroy Esq. of Clatto, Cupar, and younger brother of Captain G.B.Gilroy of the same Black Watch regiment. He came to Winchester from Ardvreck School in Scotland, and in 1911 left to take aCommission in the 2nd. Battalion Black Watch, joining them in India. He fell mortally wounded near Neuve Chapelle on march 12th. 1915 and died a few hours after.

Intelligence has been received at Castleroy, Broughty Ferry, that Lieut. Kenneth R. Gilroy, of the 2nd Black Watch, has been wounded at the front.  No details are given.

Mr Geo. A. Gilroy, manufacturer, Dundee, who resides at Clatto, Fife, has received intimation that his second son, Lieutenant Kenneth R. Gilroy, 2nd Battalion Black Watch, has been killed.  The stories received of the manner in which the gallant soldier met his death are somewhat conflicting.  One is that we had captured some German prisoners, and that one of them shot him in the head.  The other is that, having captured a number of prisoners, the Germans continued firing, despite the fact that their bullets found their own men as well as the British soldiers, one of whom was Lieut. Gilroy.  About two months ago Lieut. Gilroy was wounded in the head, and was home for a short period.  Twenty-three years of age, Lieut. Gilroy was educated at Winchester, whence he passed on to Sandhurst.  He got his commission in the 2nd Battalion Black Watch on 2nd May, 1914.

Can you tell us more about Kenneth Reid Gilroy'? Some additional facts, a small story handed down through the family or perhaps a picture or an heirloom you can share online. Contact our curator...