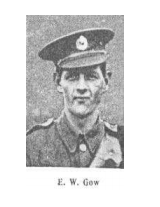 Private Gow, who is 23 years of age, joined the army in November, 1915.  He was first attached to the Royal Engineers, but was afterwards transferred to the Royal Scots Fusiliers, with whom he went to Egypt in January.

Another of Mr Gow’s sons, George, was wounded in May last, and is now serving in Ireland.

Can you tell us more about Ernest White Gow'? Some additional facts, a small story handed down through the family or perhaps a picture or an heirloom you can share online. Contact our curator...