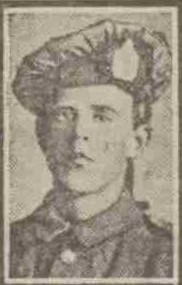 Mr George Gray, Taypark Place, Broughty Ferry, has been informed that his son, Pte George Gray, K.O.S.B., was killed on the 8th inst.

Pte. Gray was an apprentice lithographer with Messrs Valentine, Dundee, when he enlisted in April, 1916.  He was wounded in Somme fighting on 3rd Sept. last, and went on active service again in January of this year.

In sending the sad news his officer states :___”By his death I’ve lost a good man.  He was a fine soldier, and always willing to help others.”

Can you tell us more about George Gray'? Some additional facts, a small story handed down through the family or perhaps a picture or an heirloom you can share online. Contact our curator...