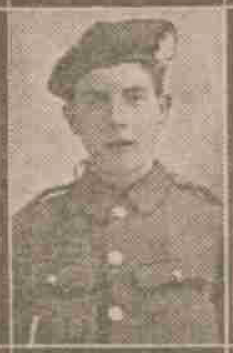 Private John Gray is the second son of Mrs Gray, 167 Alexander Street.  He was only 19 years of age.  He enlisted at the outbreak of war, and had been at the front for a considerable time, and was killed while trying to bring a wounded comrade back to the British lines.  The chaplain, writing to Mrs Gray, says :–“That he completed his course so nobly, being faithful unto death, and laying down his life for others, will be a consolation to think over.”

A son of Mrs Gray, Private Angus Gray, Black Watch, was killed in action some time ago.  Three sons—Walter, Roderick, and William—are still serving in the Black Watch.

Can you tell us more about John Gray'? Some additional facts, a small story handed down through the family or perhaps a picture or an heirloom you can share online. Contact our curator...