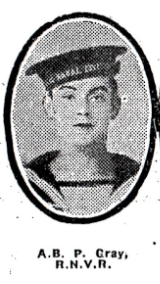 Pte. Peter Daw, Gordon Highlanders, and A.B. Peter Gray, R.N.V.R. (killed) were chums at school together, and when war broke out Pte. Daw enlisted in the Gordons.  The death of his father prevented Gray joining up with his chum, but in August, 1915, he enlisted in the R.N.V.R.  Pte. Daw, whose home was at 112 Cowgate, had been three times previously wounded, and lost the sight of his right eye at the battle of Loos; while A.B. Gray, who resided at 65 Princess St. had been twice wounded.  Both were members of the Panmure Gymnastic Association, and took a great interest in gymnastics in the city.

Can you tell us more about Peter Gray'? Some additional facts, a small story handed down through the family or perhaps a picture or an heirloom you can share online. Contact our curator...