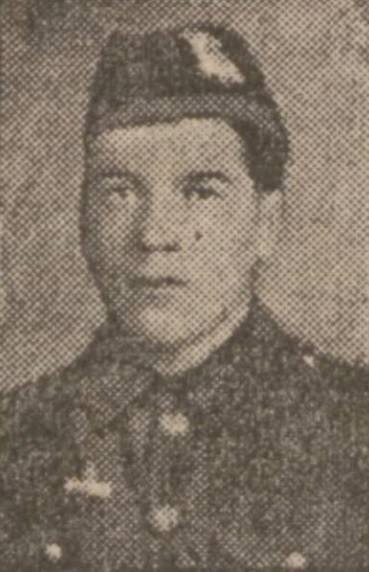 1889 Pte. Robert ‘Bob’ Gray, A Company, 4th Black Watch, was killed on the first day of the battle of Neuve Chapelle, aged 18.
He was the eldest son of James and Janet Reid Gray, 159 Hilltown, Dundee. His brother Hercules, was serving in the same Company.
He is commemorated on the Le Touret Memorial, Pas de Calais, France.

“FOUGHT AND DIED AS A GALLANT SOLDIER.” OFFICER’S TRIBUTE TO FALLEN DUNDONIAN. Mr James Gray, who resides at 159 Hilltown, Dundee, has received intimation that his son, Pte. Robert Gray, of the 4th Black Watch, has been killed in action.
Lieut. N. Law writes home as follows: –
“I am very sorry to have to inform you that your son, Pte. R. Gray, was killed in action on Wednesday, 10th March, during the advance of the British troops that day. He fought and died as a gallant soldier. His death was a sad loss to his company, and more to my platoon and all of us.”
Private Robert Gray was 18 years of age. His brother Hercules, of the same company, writing home on the 15th, says: – “On Wednesday, 10th March, the order was passed along for all of us to take a house about 200 yards in front of us which was occupied by a party of Germans.
“While running across the field which separated the house from the trench our Bob was struck.
“I did not see him go under myself. In fact, I did not know until I was told by one of the men running alongside him.” The Evening Telegraph and Post, Monday, 22 March 1915, 4.

Can you tell us more about Robert Gray'? Some additional facts, a small story handed down through the family or perhaps a picture or an heirloom you can share online. Contact our curator...