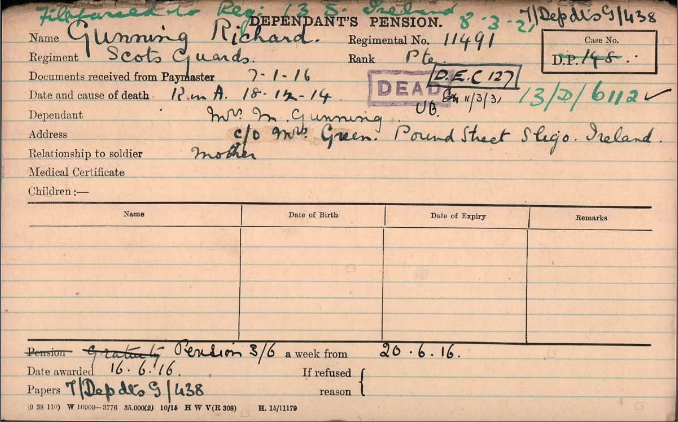 Richard has no known grave but is remembered on the Ploegsteert Memorial.

Last Words to His Mother.

“I am not going away with the intention of being killed, mother,” were the last words of Private Richard Gunning, of the Scots Guards, when he was saying good-bye to his mother on 7th September.

Alas a German bullet found him, and he now lies buried in a strange land.  Private Gunning was a reservist, having gone through the Boer War without receiving a scratch, and prior to the outbreak of the present war was employed with John Henderson & Sons (Dundee), Ltd., Lindsay Street Works.  He was forty years of age, and was a widower, his wife having died early in July.

His mother, who lives at 27 North Tay Street, Dundee, has received intimation that her son, who was over six feet in height, was killed in action on 18th December, 1914.

Private Richard Gunning of the Scots Guards, who was killed in action on 18th December, belonged to Dundee. Intimation of his death has been received by his mother, who resides at 27 North Tay Street.  Private Gunning, who was forty years of age and a widower, was employed with John Henderson & Sons (Dundee), Ltd., Lindsay Street Works.  He re-enlisted on 7th September.  Private Gunning served in the South African War.  He was over six feet in height.

Can you tell us more about Richard Gunning'? Some additional facts, a small story handed down through the family or perhaps a picture or an heirloom you can share online. Contact our curator...