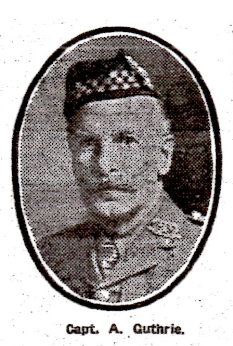 Alexander’s death was recorded as “sickness”.

At Aberdeen, Captain Alexander Guthrie, Royal Defence Corps, was fined 25s for failing to draw the blind of his bedroom in the Palace Hotel, where he resided, on the night of September 8.

Arthur Allan Ryan, the manager of the hotel, was charged in connection with the same offence, and the question arose as to which of the two was responsible.  Captain Guthrie said he was not in the room from 7.25 p.m. till 9.25, when he went upstairs after dinner, and then the light was up and the blinds were not drawn.

The Sheriff found the charge against Captain Guthrie proved, and that against the hotel manager not proved.

WHILE ON MILITARY DUTY.

The death has occurred suddenly at Aberdeen of Captain Alexander Guthrie, Royal Defence Corps, a member of the firm of Messrs J. & A. Guthrie, jute spinners, Seabrae Mill, Dundee.

Deceased, who was an old Volunteer, desired to give his services to his country although he was over military age, and shortly after the outbreak of war he obtained a commission as captain in the National Reserve, which is now known as the Royal Defence Corps.  He was seized with illness on Friday afternoon while on duty, and although everything possible was done he passed away about five hours later.

Captain Guthrie, who was 52 years of age, was a son of the late Mr James Guthrie, of Broughty Ferry, and was educated at Dundee High School and Craigmount, Edinburgh.  When quite a young man he entered into partnership with his brother, Mr Jas. Guthrie, Hopepark, West Ferry, in the management of Seabraes Mill.  Mr Guthrie was an elder of St Peter’s U. F. Church, and took a great interest in the Royal Institution for the Blind, of which he was a Director.

He is survived by a widow and three daughters, who reside at 2 Clarendon Terrace, Dundee.

Can you tell us more about Alexander Guthrie'? Some additional facts, a small story handed down through the family or perhaps a picture or an heirloom you can share online. Contact our curator...