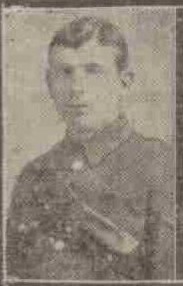 There is no George Guthrie 9978, Black Watch, listed on either C.W.G.C. or S.D.G.W, he served as Godfrey Fox and is listed on this roll of honour under the name of George Fox

ONE OF FOUR SOLDIER SONS.

Word has been received from the War Office by Mr George Guthrie, 46 Hilltown, Dundee, that one of his four soldier sons, George, a private in the 1st Battalion Black Watch, has been posted as missing from 1st October.

Private Guthrie, who was a reservist, was called up at the beginning of the war, and went through the most serious engagements.  His parents are still clinging to the hope that he has been taken prisoner and is alive and well.

A brother of the missing man, Private John Guthrie, is also at the front in the same regiment, while another brother, Robert, wrote his parents from Canada some time ago stating that he was on his way with the Canadian contingent to fight for the old country.

Another son of Mr Guthrie, William is a private in the 4th Battalion Black Watch (Territorials).  All four sons have been employees of Messrs Baxter Bros., to whom Mr Guthrie himself has given a long period of service.  The missing brother is well remembered.

Can you tell us more about George Guthrie'? Some additional facts, a small story handed down through the family or perhaps a picture or an heirloom you can share online. Contact our curator...