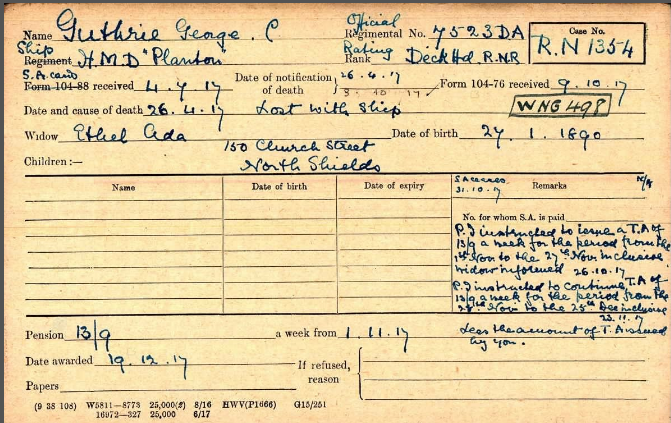 George has no known grave but is remembered on the Chatham Naval Memorial. He was serving aboard H.M. Steam Drifter Plantin, which was hired by the Admiralty in 1915 as an armed net drifter. She was built by McIntosh Boat Builders, Buckie in 1912 and was 84 tons.

On April 26, 1917, she was engaged in minesweeping just off Old Harry Rocks, dealing with a minefield laid by the German U-boat UC-72 (Oberleutnant zur see Ernst Voight). She fouled a mine which detonated beneath her, destroying the 84-ton wooden vessel, sinking immediately with the loss of nine men including the 47-year-old skipper John Wood and his two sons John, 20, and William, 18.

Only one of the nine man crew survived and no bodies were recovered.

Can you tell us more about George Craik Guthrie'? Some additional facts, a small story handed down through the family or perhaps a picture or an heirloom you can share online. Contact our curator...