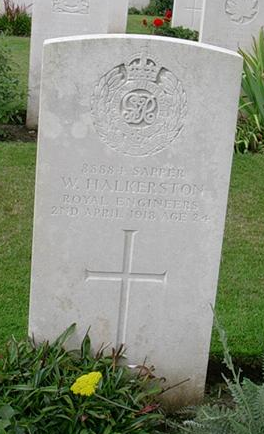 Mr and Mrs John Halkerston, Ivy Cottage, Muirhead of Liff, have also sustained a double bereavement.  Intimation has come to hand of the death in action of their son, Sapper William Halkerston, whose elder brother, Gunner John Halkerston, R.F.A., was killed in action some time ago.  Mr and Mrs John Halkerston have also been informed that their third son, Pioneer James Halkerston, R.E. has been gassed.  The late Sapper Halkerston was 24 years of age, and enlisted in May, 1915, he had been on active service for over two years, and was formerly a brushmaker in the employment of Mr James Hood, Barrack Street.  John was formerly a compositor in the Glasgow office of the ”Weekly News,” and James, who is in hospital in England, was an apprentice compositor with Wm. Kidd & Sons, Whitehall Street, Dundee.  He also enlisted in 1915, and had been two years at the front.

Can you tell us more about William Halkerston'? Some additional facts, a small story handed down through the family or perhaps a picture or an heirloom you can share online. Contact our curator...