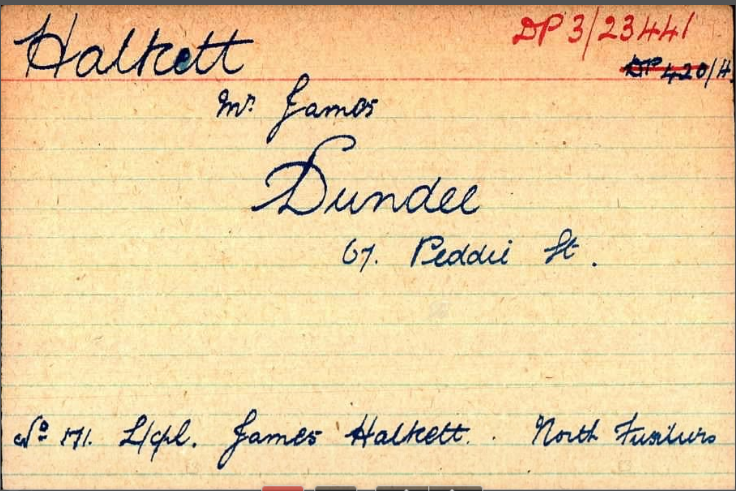 James was a Dundee man living and working in Newcastle on outbreak of war.  He immediately volunteered for the Northumberland Fusiliers Bn being Recruited by the Tyneside Scottish committee which later became known by the title 1st Bn Tyneside Scottish.  His enlistment is remarkable not only that he was away from Dundee,  nor that he joined a Regiment with a Scottish “honour title”. But perhaps more so that he was an early joiner by his Regimental number being 171 for 20th Northumberland Fusiliers  and he was 50 years old when recruitment at that time was essentially 19 – 41 years old

The battalion famously joined 34 Division with which Division they entered France in late January 1916.  The Bn suffered casualties almost from the outset when in training and familiarisation they came under enemy fire in  so called “quiet” sector around Fleurbais. James survived a number of skirmishes with the enemy in which 1 Tyneside Scots suffered casualties.  Eventually taking part in the Divisions attack on La Boiselle on the opening day of the Somme where as a Division they suffered the worst casualties of all Divisions on the Somme.

Whereas Bn War Diaries are usually notoriously dry reading and rarely go in to great details of Other Rank casualties, the 1st Tyneside Scots is a fantastic exception listing all my name, number, date of casualty, type of casualty, (Killed, missing wounded),  and some times even the nature of wounds.  From this it is accurately identified that James suffered his wounds at La Boiselle on 1 July 1916 and an efficient casualty evacuation chain. Saw him evacuated through the various links in that chain of evacuation in France, back to Uk and indeed back to Dundee War Hospital where he unfortunately succumbed to his wounds only 11 days after his wounding

James was survived by his father, also James of Peddie Street, Dundee

Can you tell us more about James Halkett'? Some additional facts, a small story handed down through the family or perhaps a picture or an heirloom you can share online. Contact our curator...