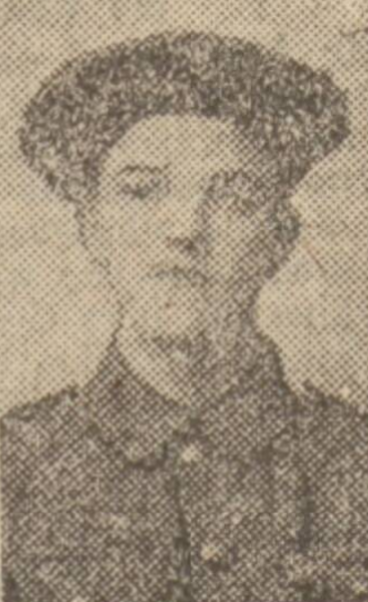 Richard has no known grave but is remembered on the Thiepval Memorial.

24485 Pte. Richard Halkett, 154th Machine Gun Corps, was born in St Paul’s Dundee, circa 1896, the son of Mr and Mrs Richard Halkett.
His father was a soldier having joined the Black Watch at Perth in April 1885. On the outbreak of the Boer War he was recalled to the Colours. Serving in South Africa from February, 2644 L.-Cpl. Richard Halkett, 2nd Black Watch, was killed in action at Bloemberg on 26 May 1900, when his son was approximately 4 years old.
The young Richard had joined the 5th Black Watch before the outbreak of the Great War, and went to France with his Battalion in November 1914. Transferred to the Machine Gun Corps, he was killed in action on 17 November 1916, aged 20. ‘Like his father, [he] died on the field of battle’.
His mother lived at 26 Hospital Wynd, Dundee.
Pte. Richard Halkett is commemorated on the Thiepval Memorial, Somme, France.

DUNDEE TERRITORIAL KILLED. Private Richard Halkett, a Dundee Territorial in the Black Watch, has, like his father, died on the field of battle. Lance-Corporal Richard Halkett was killed in the Boer War, and information has now come to hand that the younger Richard has fallen in action.
His mother, who resides at 26 Hospital Wynd, Dundee, has received intimation that he was killed instantaneously. Deceased, who was 20 years of age, was a Territorial, and had been mobilised since the outbreak of war. He was transferred to the machine gun section some time ago. The Courier, Tuesday, 5 December 1916, 4.

Can you tell us more about Richard Halkett'? Some additional facts, a small story handed down through the family or perhaps a picture or an heirloom you can share online. Contact our curator...