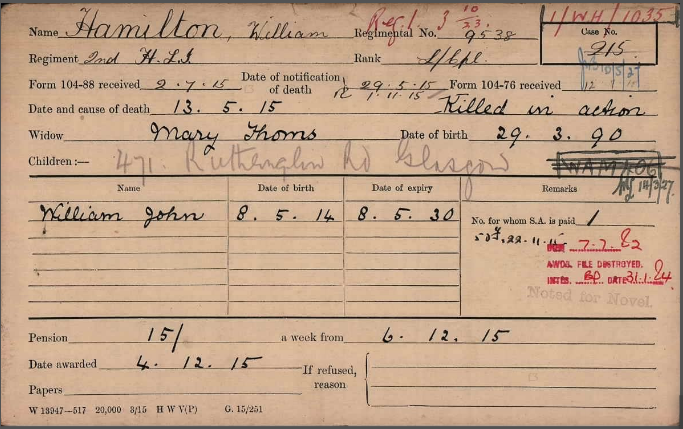 WHILE IN A DUGOUT.

Lance-Corporal William P. Hamilton, 2d H.L.I., has been struck down after having taken part in the war from its very inception.  Deceased who, when the war was declared, lived at 2 Nelson Street, Dundee, landed in France on 5th August, and went through many stirring engagements.  The news of his death was conveyed to his wife in a letter from a friend in the same regiment in which he stated that the lance-corporal along with two others, was killed by a shell in a dugout.

He was 28 years of age, and is survived by a widow and a boy one year old.  Lance-Corporal Hamilton was connected with the firm of Messrs Hamilton and Brown, house furnishers, King’s Road Dundee.

Can you tell us more about William Hamilton'? Some additional facts, a small story handed down through the family or perhaps a picture or an heirloom you can share online. Contact our curator...