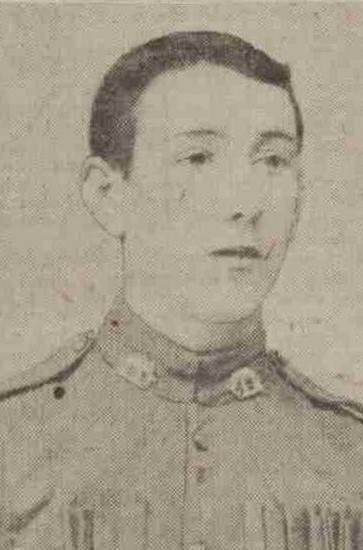 IS MISSING AFTER CHARGE.

PROMOTED SHORTLY AFTER BEING CALLED UP.

Corporal James Handy, 2d Connaught Rangers, a Dundee man, is amongst the latest recipients of the D.C.M.

His wife resides at 2 St David’s Lane, Dundee, and she has had several communications from her husband’s comrades informing her that the brave corporal has been missing since April 26.  A cousin of Corporal Handy, who is in the same regiment wrote :__”We were in a charge on 26th and 27th April, and Jim was with me for about a quarter of an hour.  After that I missed him and two comrades, and I went out in search of him two days later, but could not find him.

Twenty-nine years of age and a Reservist, Corporal Handy served three years with the 2d Connaught Rangers.  He was a reservist for nine years, and before mobilisation he was employed in the cleansing department of Dundee Corporation.  He was promoted from the rank of private shortly before proceeding to the front.

Can you tell us more about James Handy'? Some additional facts, a small story handed down through the family or perhaps a picture or an heirloom you can share online. Contact our curator...