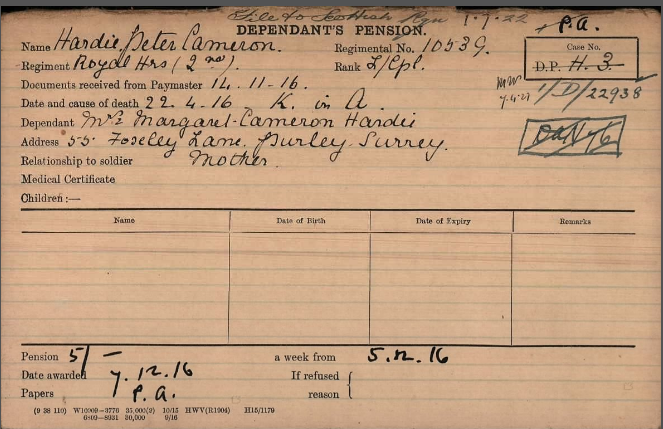 Intimation has reached Dundee that Lance-Corporal Peter Hardie, Black Watch, who was a former pupil of the Harris Academy, has been killed in action.  Deceased, who was 25 years of age, was a son of Mr R. A. Hardie, Foxley Lane, Purley, and formerly of Dundee.  Lance-Corporal Hardie enlisted in the Cameron Highlanders in the autumn of last year, and was afterwards transferred to the Black Watch.  He had been at the front since the early spring.  He was a member of years in the service of Messrs Fleming, Douglas, & Co., jute merchants, Dundee, and later held a responsible position with a large firm in London.

Can you tell us more about Peter Cameron Hardie'? Some additional facts, a small story handed down through the family or perhaps a picture or an heirloom you can share online. Contact our curator...