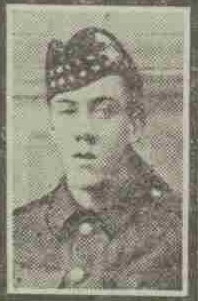 Michael has no known grave but is remembered on the Arras Memorial.

Dundee soldier posted as missing in April, Private Michael Hargadon, Royal Scots Fusiliers.  The intimation in regard to Private Hargadon has been received by his widowed mother, who resides at 8 Hunter Street, Dundee.  The missing soldier, who is 21 years of age, enlisted in January, 1916, and had been over a year at the front.  His mother received a field postcard from him on the 21st April—two days before the date on which he was missing—in which he stated that he was quite well.  He was previously a labourer in the city.

Can you tell us more about Michael Patrick Hargadon'? Some additional facts, a small story handed down through the family or perhaps a picture or an heirloom you can share online. Contact our curator...