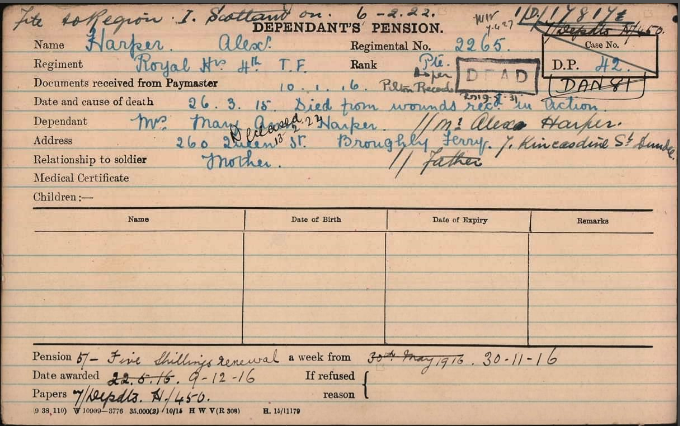 2265 Pte. Alexander Harper, 4th Black Watch, was fatally wounded on 25 March 1915.
Born in Montrose, Harper joined ‘Dundee’s Own’ on the outbreak of war, and went to France with the battalion in February 1915.
He had previously been employed by Halley Brothers.
Pte. Harper died on 26 March, aged 27, the only son of Mrs Harper, Queen Street, Broughty Ferry. He was the first of St Mary’s congregation to lose their lives in the Great War.
He is buried in Cabaret-Rouge British Cemetery, Souchez, Pas de Calais, France, XVII. C. 13.

CAME THROUGH NEUVE CHAPELLE. BROUGHTY SOLDIER KILLED WHILE TRENCH-DIGGING. Private A. Harper, 4th Black Watch, has been killed in action in France.
In a letter to his mother, who resides at Queen Street, Broughty Ferry, Rev. J. Mitchell, the Chaplain of the 1st Seaforth Highlanders, says her “son died from wounds received in action. He went out with a digging party to the trenches, where he was shot, and died the next morning (March 26th). He was laid beside the soldiers who had laid down their lives for their country.”
Private Harper, who was 27 years of age, was until recently an employee of Messrs Halley Brothers. He joined the 4th Black Watch, and went with the battalion to France, taking part in the glorious victory at Neuve Chapelle. He and his comrades for a time after the great fight had a rest in the rear, but on the 25th he left for the trenches, as stated, receiving that day his death wound. He was an only son, and until a few months ago resided in Dundee. He was connected with St Mary’s Episcopal Church, Broughty Ferry, and is the first of its roll of honour to fall on the field of battle. The People’s Journal, Saturday, 3 April 1915, 9.

Can you tell us more about Alexander Harper'? Some additional facts, a small story handed down through the family or perhaps a picture or an heirloom you can share online. Contact our curator...