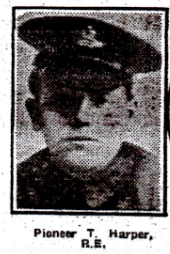 Mrs Harper, 98 Princes Street, Dundee, has been informed of the death in action of her son Private Thomas Harper, Royal Engineers.

The news is contained in a letter from a comrade in which he states that Private Harper was in the act of rescuing a badly wounded officer when he fell a victim to shrapnel from a shell which burst near him.

Private Harper was only 20 years of age.  He enlisted on the day war was declared, and had seen all the biggest engagements on the western front.  A younger brother, James, enlisted when only 16, and took part in the Mons retreat.

Can you tell us more about Thomas Harper'? Some additional facts, a small story handed down through the family or perhaps a picture or an heirloom you can share online. Contact our curator...