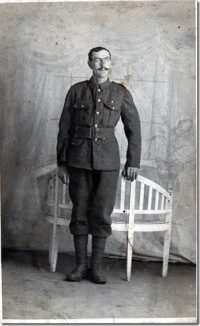 John has no known grave but is remembered on the Menin Gate Memorial. John served in the Boer War and was recalled to duty at the outbreak of the Great War. It is believed that he was shot by a sniper at St. Julien, Belgium.

War is leaving a grim and heavy toll upon the manhood of Dundee.  Two exceedingly sad cases have just come under notice of the “Courier,” and these relate to families who have given their men ungrudgingly to the service of their country.  Mrs Harrison, 91 Cowgate, was yesterday informed that her husband, a private in the Scots Guards, had been killed in action.  The notification was the all too familiar form stating simply that Private John Harrison had been killed in action, but in this case it brought with it the tidings of a poignant tragedy. Eight children of tender years have been left fatherless, and of these only one–a girl of fourteen–is old enough to grasp the full meaning of the official notice.

Private John Harrison, who was 34 years of age, served in the army for seven years, and nine years ago entered upon his term as reservist.  In March of next year the usual period of nine years would have expired.  Harrison prior to the war was employed as a pipe-layer in the service of Dundee Gas Commissioners, in which capacity he proved an able and steady worker.  He was with his regiment in South Africa, and emerged from that campaign without a scratch.  When the reservists were called up his farewell to his wife was “Goodbye, wife. We’ll soon be back.”

Writing from the trenches, he gave evidence, that the children were always in his thoughts, and many were the loving messages he sent them.  Three of Mrs Harrison’s children were born of a previous marriage, she being a widow when she was married to Private Harrison.  The ages of the children–four boys and four girls–range from fourteen years to nine months.

A pathetic coincidence in regard to the receipt of the sad news is the fact that a few days ago Mrs Harrison had a vivid dream, in which she saw her husband being carried from the battlefield.  The non-arrival of letters for five weeks prompted Mrs Harrison to write to the War Office.

Tragedy has followed tragedy in this home circle.  About a fortnight ago Mrs Harrison learned that her brother John May, a leading stoker on H.M.S. Bulwark, had lost his life when that vessel was wrecked by an explosion.

Can you tell us more about John Robert Cameron Harrison'? Some additional facts, a small story handed down through the family or perhaps a picture or an heirloom you can share online. Contact our curator...