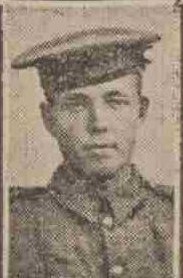 Able Seaman Hart was employed as a porter Monifieth Railway Station prior to enlisting in the R.N.D., over two years ago.

Hart, who has been on active service for 21 months, had been with the Royal Naval Division at the Dardanelles, Salonika, Egypt, and on the western front.

Another Monifieth railwayman has made the supreme sacrifice for King and Country on the battlefield.  Information reached Monifieth this morning that Able Seaman John F. Hart Royal Naval Division, had been killed in action at the front on Saturday, 17th February.  The sad intelligence was conveyed to his mother last night in a letter from the Admiralty, Able Seaman Hart was employed as a porter at Monifieth Railway Station, and joined the R.N.D. over two years ago, and with the Howe Battalion has spent much service on the various fronts of our far-flung battle-line.  With the Royal Naval Division, he was at the Dardanelles, and from there he was transferred to Salonika, thence to Egypt.

Almost a year ago saw his division upon the western front, where he was wounded in both eyes when bombing some German dugouts last autumn.  He was home on leave, and visited his many friends in Monifieth at the beginning of this year, after a continuous period of active service of 21 months, and had been back in the firing line only a few weeks when he fell.  Mr Hart, who resides at King Street, Broughty Ferry, has another son serving in the navy.

Can you tell us more about John Fleming Hart'? Some additional facts, a small story handed down through the family or perhaps a picture or an heirloom you can share online. Contact our curator...