We need you to tell us more about the life and times of William A. Haxton 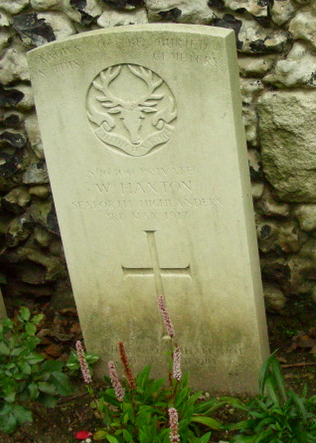 More about William A. Haxton

All doubt has now been set at rest as to the fate of Private William Haxton, Seaforth Highlanders, who was reported missing some time ago.

A chaplain writing to Mr James Haxton, 7 East Haddon Road, Dundee, says :___”Private Haxton was reported missing on 3rd May.  Our battalion attacked on that day, reached its objective, but had to retire, leaving some men behind.  On 11th and 12th we attacked again and took the ground where our missing were lost.  But we came out of that line last night.  The troops who relieved us searched the ground and found the bodies of one officer and 13 of our men.  Your son’s body was one of those found.”

Deceased, who was in the employment of Messrs Cooper and Greig, engineers, went to the front in January last.  A brother was killed some time ago, another has been twice wounded, while a third is still serving.

Can you tell us more about William A. Haxton'? Some additional facts, a small story handed down through the family or perhaps a picture or an heirloom you can share online. Contact our curator...