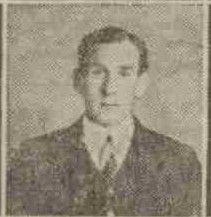 KILLED THE DAY AFTER LEAVING TRENCHES.

Mr Robert Hay, 10 Wolseley Street, Dundee, received intimation of his son’s death in a letter from the Rev. A. M. Renwick, Chaplain to the 2d and 4th Black Watch.

Under date 10th June, in which he says :__ “It is with deep regret I have to intimate to you the death of your son, who was killed by the bursting of a shell.  The battalion had come out of the trenches the day before.  Yesterday evening he was walking a long the road with another soldier when a shell fell in a field very near them.  Your son was killed instantaneously, and could have had no pain.  His companion happened to step back a little as the shell fell, and so was saved.

“We laid him to-day in a soldier’s grave some distance behind the firing line.  The cemetery is for soldiers only, and is splendidly kept.  Every grave is marked with a wooden cross, with name and rank of each man.  If you desire it you may find out at the close of the war exactly where the cemetery is.  It is No. 2 Row 8 Grave 22.  Meanwhile no names of places can be given.”

Lance-Corporal Hay, who was 27 years of age, was a reservist, and was formerly employed in Messrs Baxter’s foundry.  Another brother has been twice wounded, and is again in the firing line.

Can you tell us more about John Leslie Hay'? Some additional facts, a small story handed down through the family or perhaps a picture or an heirloom you can share online. Contact our curator...