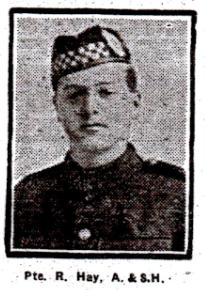 Official intimation has been received by Mr and Mrs Robert Hay, Dudhope Park, Dundee, that their second son, Private Robert Hay, Argyll and Sutherland Highlanders, has died in hospital from wounds received in action in the recent fighting.

Deceased was 22 years of age, and previous to joining the army was in the employment of Mr D. M’Intosh, butcher, Albert Street, Dundee. Mr and Mrs Hay’s eldest son, George, who belongs to a cavalry regiment, has also been at the front, where he sustained an accident, and is now stationed in Ireland.

Can you tell us more about Robert Hay'? Some additional facts, a small story handed down through the family or perhaps a picture or an heirloom you can share online. Contact our curator...