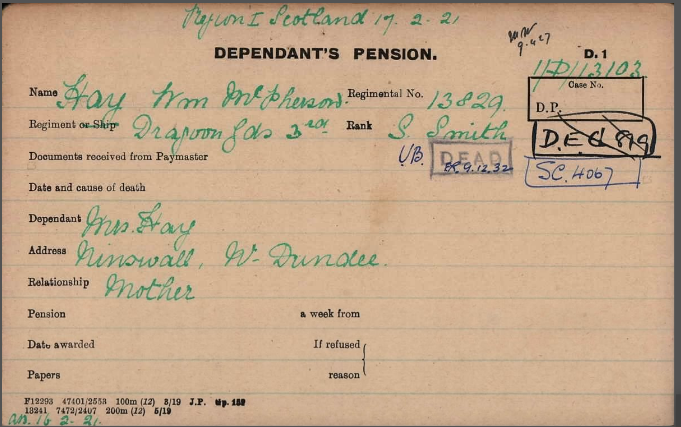 William has no known grave but is remembered on the Pozieres Memorial. He is believed to be the brother of 2nd Lieutenant James Duncan Hay, Kings Own Royal Lancaster Regiment, who died of wounds 15.12.1917.

Private William Hay, Royal Dragoon Guards, was a son of Mr T. Hay, Ninewells and enlisted in January, 1916.  Deceased was 27 years of age.  He went to the front in December last year, and previous to enlisting was in the employment of Mr G. P. Findlay, Ironmonger, Overgate.  He was well known in aquatic circles, being a member of the Whitehall Swimming Club.  His brother Lieutenant James D. Hay, King’s Own Lancaster Regiment, died of wounds a few months ago.

Can you tell us more about William Mcpherson Hay'? Some additional facts, a small story handed down through the family or perhaps a picture or an heirloom you can share online. Contact our curator...