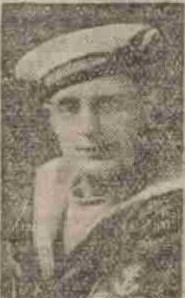 Leading Seaman Ernest Head, of H.M. Submarine C19, one of the flotilla attached to Dundee, has been lost overboard.

Mrs Head, who resides at 51 Crescent Street, Dundee, yesterday received official intimation of the sad occurrence from the Admiralty.  The statement is couched in the laconic terms characteristic of the Admiralty, and reads :–“Telegraphic information has reached this Department that Ernest Head Leading Seaman, official number 193392 belonging to His Majesty’s submarine C19, tender to H.M.S. Alecto, has been lost overboard from the first-named vessel.  (Here is stated the location of the vessel.)  The date of death is not stated, but the telegram reporting the occurrence was forwarded to-day.”

The Admiralty’s notification was followed immediately by a letter of sympathy from one of Leading Seaman Head’s officers.

The unfortunate man was in his thirty-sixth year, and was a native of Cromer.  He settled down in Dundee when the naval base was established in the Tay.  Deceased is survived by a widow and four children.

Mrs Head has already been visited by one of the lady visitors in the Dundee Branch of the Soldiers and Sailors’ Families’ Association.

Can you tell us more about Ernest Head'? Some additional facts, a small story handed down through the family or perhaps a picture or an heirloom you can share online. Contact our curator...