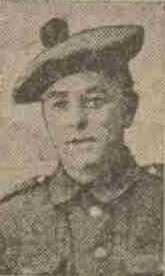 Sergeant Thomas Healy, MM and bar, Black Watch, 15 John Street, has been killed in action.  The gallant sergeant had been three and a half years at the front.  Prior to enlistment he was employed in Cowgate Calender. A pathetic feature of Sergeant Healy’s death is the fact that his father, who is also on active service in France, came into contact with his son’s battalion the day after he was killed and attended the funeral service.  Deceased’s brother is serving with the colours, and at present is in hospital suffering with wounds.  This is the second time he has been wounded.

Intimation has been received that Private Thomas Healy, whose wife resides at 7 Cochrane Street, Dundee, has been awarded the Military Medal for conspicuous gallantry on the field in carrying in wounded while under very heavy shell fire.

Private Healy, who is 21 years of age, enlisted in the Black Watch at the outbreak of war, and since then has come through scathless. Previous to enlistment he was a weaver.

Can you tell us more about Thomas Healy'? Some additional facts, a small story handed down through the family or perhaps a picture or an heirloom you can share online. Contact our curator...