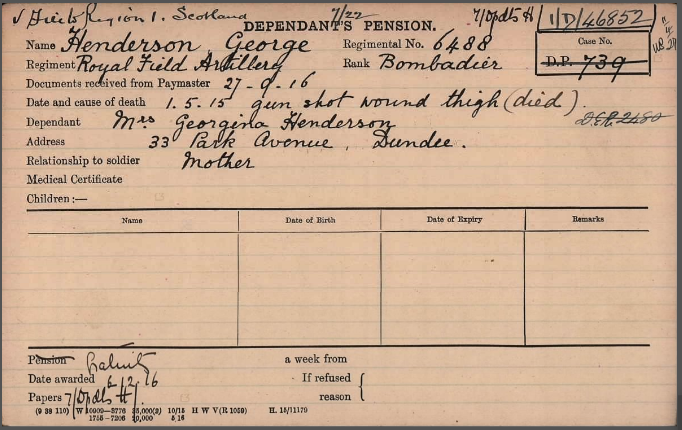 Bombardier George Henderson, a Dundee lad, who is a member of the R.F.A., has been seriously wounded.

Bombardier Henderson’s home is at 33 Park Avenue, and intimation has been received by his relatives that he is dangerously ill in hospital at Boulogne, and that he suffers from a gunshot wound in the thigh.  The injured lad is 21 years of age, and is well-known in the east end of the town.  Along with some more of his companions he enlisted in the Artillery in September.  He was first sent to Maryhill Barracks, Glasgow, but later was transferred to Edinburgh.  Henderson was keen on his work, and took a special interest in signalling, and had been awarded the strip previous to his going to the front in February.  In France he was attached to the 131st Battery.

Previous to joining the army Henderson was employed at Balmossie Bleachfield.

Can you tell us more about George Henderson'? Some additional facts, a small story handed down through the family or perhaps a picture or an heirloom you can share online. Contact our curator...