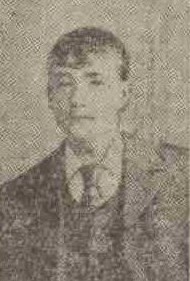 SECOND OF SIX BROTHERS TO LOSE LIFE IN WAR.

A widow and six children, the eldest of whom is just fourteen, are left to mourn the loss of Private James Henderson a Dundee member of the 1st Black Watch, who lost his life on 16th March.  The deceased soldier was 36 years of age, and was recalled to the colours as a reservist.  His home was at 9 Atholl Street, Lochee.  Prior to the outbreak of war Private Henderson, was a calender worker with Cox Brothers, Ltd.  The first intimation which Mrs Henderson received of her husband’s death was the receipt of a letter from the orderly-room of the battalion.  The letter was written by Corporal H. W. Skinner, and stated that Private James Henderson had been killed by shell fire while on sentry duty on the 16th March.  His remains were interred in a cemetery on the Neuve Chapelle-Bethune Road, and a cross with his name, &c., inscribed thereon had been erected over the grave.  It is sad to think that on the very day on which he fell Mrs Henderson had a cheering letter from her husband, the letter stating he was keeping quite well.  Private James Henderson was one of six brothers who were all soldiers.  A brother, Private Robert Henderson, of the 2d Royal Scots, succumbed to wounds in the present campaign, while another brother, Private David Henderson of 1st Gordons, died six years after the Boer war.  The remaining three brothers are still with the colours, being all members of the 2/4th Black Watch.  They are Sergeant John Henderson, Corporal Alexander Henderson and Private George Henderson.

Can you tell us more about James Henderson'? Some additional facts, a small story handed down through the family or perhaps a picture or an heirloom you can share online. Contact our curator...