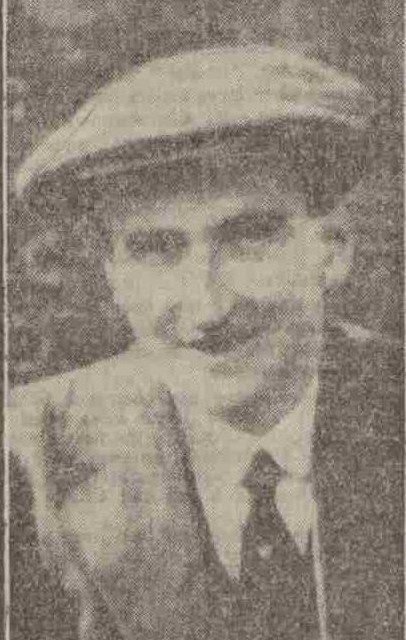 BY ACCIDENTAL DISCHARGE OF RIFLE.

The accident occurred in the Drill Hall yesterday.  Lieut. Henderson was sitting writing at his desk in the armoury, and in the vicinity was another officer handling a rifle, which was fitted with a Morris tube to give it the effect of a miniature rifle.

All unconscious that in the weapon was a deadly bullet, the officer touched the trigger.  There was a crack, and Lieut. Henderson was seen to have been hit and seriously injured.  Means of having him removed to the Royal Infirmary were instantly procured, and at the Institution it was discovered that the officer had been hit in the nape of the neck, and that the bullet had in its passage touched the spinal column.  Lieut. Henderson underwent an X-ray examination, and his condition is regarded as critical.

The wounded officer is a chartered accountant, and is a partner of the firm of Henderson & Loggie.  He is a brother of Mr J. R. Henderson, Lindsay Street Works, Dundee.

Two Months ago, he joined the battalion and already he has gained the reputation of being a clever and popular officer.

Much sympathy is expressed for him and also his brother officer who was handling the rifle at the time of the accident.

WHO WAS VICTIM OF SHOOTING ACCIDENT.

Death has put an end to the sufferings of Lieutenant James Richard Henderson, 4th (Reserve) Battalion, Black Watch, who was the victim of a shooting accident in Dundee Drill Hall a week ago.  He died in Dundee Royal Infirmary on Saturday afternoon.

Lieutenant Henderson was thirty years of age, and after but two month’s service with the battalion had gained the reputation of being a clever and popular officer. He was a partner in the firm of Henderson & Loggie, C.A., Dundee, and was the younger son of the late Mr Richard Henderson, of John Henderson & Sons, Dundee, Ltd., jute spinners and manufacturers, Lindsay Street Works, North Lindsay Street.

An enthusiastic tennis player, he was a member of the Dudhope Club. His tragic death has occasioned widespread regret.

The circumstances attending his death are extremely sad.  He was sitting writing at a desk in the armoury of the Drill Hall, and in the vicinity was a brother officer handling a rifle. Suddenly the weapon went off, and the bullet pierced Lieut. Henderson’s neck.  In its passage it touched the spinal column, causing paralysis.

Lieutenant J. R. Henderson, of the 4th (Reserve) Battalion, Black Watch, who died as the result of a shooting accident in Dundee Drill Hall, was buried with military honours yesterday.  The obsequies were attended by a large number of the military authorities in Dundee, including Colonel McKerrell, fortress commander, Dundee ; Colonel Harry Walker, commanding the 4th Battalion Black Watch ; Colonel Pirie, commanding the 4th Reserve Battalion ; while a number of regulars who are at present at home on furlough also showed their respect by attending.  There was also a large and representative attendance of the citizens, including Lord Provost Don and a number of the Magistrates and Town Councillors.  The cortege attracted considerable attention as it passed through the city, the streets being lined by large crowds, many of whom were deeply affected. The funeral was one of the largest which has been seen in Dundee for some time, and the traffic along the main routes was practically stopped to allow of its progress.  The band of the 4th Battalion Black Watch played the usual mournful airs, and the slow, measured step of the soldiers in itself was touching.  The half of E Company of the 4th Reserve, of which the deceased was second-lieutenant, preceded the hearse, and the coffin was covered with the Union Jack.  Almost two hours was occupied in the march from the deceased’s residence at 11 Dudhope Terrace to the Western Cemetery, and darkness was beginning to fall when the soldiers fired three volleys over the grave.

At the house impressive services were conducted by the Revs. Walter Richards, James Weatherhead, and John Campbell, while the military chaplains, the Rev. Colonel Henderson and the Rev, Colonel Campbell, officiated at the graveside.

Can you tell us more about James Richard Henderson'? Some additional facts, a small story handed down through the family or perhaps a picture or an heirloom you can share online. Contact our curator...