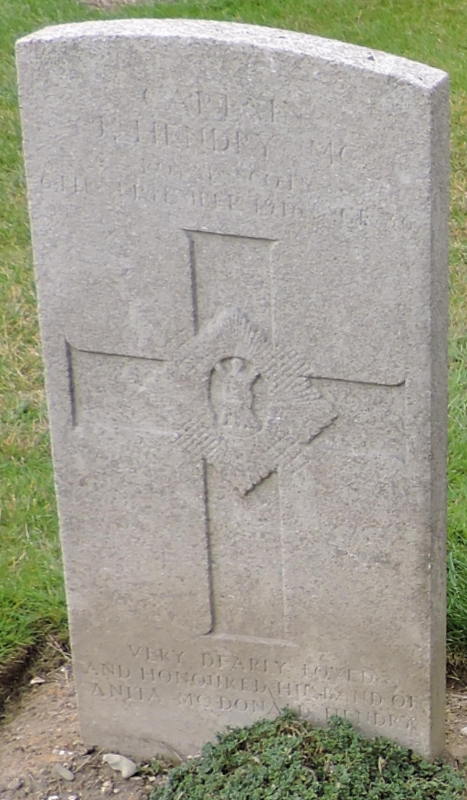 Intimation has been received that Captain James Hendry has been dangerously wounded, and is now in hospital in Rouen.  Captain Hendry is the youngest son of the late Mr Andrew Hendry, solicitor, Braeknowe, Dundee.  He was educated at the Dundee High School and Merchiston Castle, Edinburgh.

An electrical engineer to profession, he served his apprenticeship in Glasgow, subsequently setting in Liverpool.  He joined the King’s Liverpool Battalion in September, 1914, and shortly after he obtained a commission in a battalion of the Royal Scots.  He was promoted Captain in 1915.

Captain James Hendry, Royal Scots, who has died in hospital in Rouen of wounds received in action on 2nd August, was the youngest son of the late Mr Andrew Hendry, solicitor, Braeknowe, Dundee.

An electrical engineer by profession, he received his early training in Glasgow and Pittsburg, subsequently being engaged as a consulting engineer. He was educated at the Dundee High School and Merchiston Castle, Edinburgh, and had settled in Oxton, where he was well known.  At the outbreak of the war he joined the 1st City Battalion oh the King’s (Liverpool) Regiment, and in January, 1915, he was transferred to the Royal Scots.  He was an active, efficient and highly skilled officer, and was very popular in his battalion.  It was understood that he had been marked out for higher promotion at the time he received his wounds. Captain Hendry married in 1909 the eldest daughter of Mr A. C. Mitchell of Halewood, near Liverpool, and is survived by her and one child.

Included in the list of war honours published this week is the Name of Captain James Hendry, Royal Scots, on whom had been conferred the Military Cross.  Captain Hendry was mortally wounded during the exploit which won him the coveted distinction.  The official announcement regarding the award is as follows :–For conspicuous gallantry in organising a bombing attack which captured and consolidated about 100 yards of the enemy’s trench.  He led with great dash, and was severely wounded.  Subsequent information stated that the gallant officer died of wounds on September 6.  Captain Hendry was well known in Dundee.  He was the youngest son of the late Mr Andrew Hendry, solicitor, and brother of Mr J. M. Hendry, solicitor, who died this week.

Can you tell us more about James Hendry'? Some additional facts, a small story handed down through the family or perhaps a picture or an heirloom you can share online. Contact our curator...