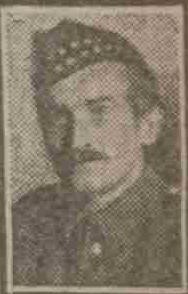 Sergeant H. Anderson, Machine Gun Corps, has gained the Military Medal for conspicuous service in France.  Sergt. Anderson is the second son of Mr and Mrs W. H. Anderson, Church Street, Broughty Ferry, and formerly of Ancrum Road, Lochee.  He joined the army in the early days of the war, enlisting in the Royal Scots Fusiliers, with which regiment he went to France two years ago.  He was later transferred to the Machine Gun Corps.  His wife resides in East Wemyss.  A younger brother is serving in the R.F.A. in the Balkans.

Can you tell us more about Herbert Anderson'? Some additional facts, a small story handed down through the family or perhaps a picture or an heirloom you can share online. Contact our curator...